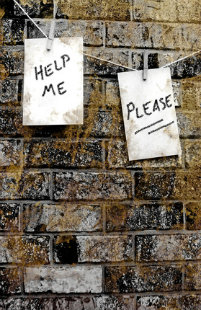 Giving up on life, or suicide, is always an option.

But there’s a difference between being hopeless and helpless.

If you’re feeling hopeless, that’s OK, it’s natural and something many people go through. But you’re not helpless.

Regardless of your circumstances you always have the option to ask for help, no matter what you’re going through. It’s narcissistic to think no one understands.

Admitting we need help does not mean we have the courage to ask for it. The fear of asking is often enough to give us a pause of such depth and weight that we consider giving up on life altogether.

Pay Attention to the Quiet Ones

Unfortunately, from my experience, it’s the quiet ones who are usually in the most pain; you might not even know they’re having trouble.

In my case, the people closest to me knew I was in trouble; even as I tried to convince them everything was OK. Yet they also knew there was nothing they could do. God bless them for trying though.

Why Suicide Can Be Attractive

From the Ten Commonalities of Suicide (.PDF) in The Suicidal Mind (Amazon) by Edwin Shneidman:

The common goal of suicide is cessation of consciousness: The anguished mind of a suicidal person interprets the end of consciousness as the only way to end the suffering.

As someone who seriously considered suicide at a point in my life, I can see the attraction.

And quite honestly, there are still times when I think it would be easier to just check out. This may come as a shock to many who know me; being that I’m mostly upbeat, emotionally connected, and mentally stable.

On the flip-side, as someone who’s known others that have ended their own life, I’ve witnessed the destruction, pain, and the selfish side of suicide.

I once said that “not committing suicide may have been the first truly unselfish act I’d ever taken.”

Yet I can still see why it’s attractive. Besides the mental illness and chemical imbalance that may lead someone to take their own life, sometimes we all wonder: what’s the point?

The point is love.

Why Giving Up On Life is not the Best Option

A quote I’ve often heard is Donahue’s “Suicide is a permanent solution to a temporary problem.”

Upon thinking about my own low points, I realize this approach may not address the issue we feel in these moments. That pain is temporary.

Quite the contrary; if I perceive something to be a permanent solution, that sounds good to me.

Through healing and raising emotional intelligence, I’ve learned that emotions are temporary and can be controlled. Thankfully we’re not our emotions and through practice and learning they can be mastered.

Giving up on life is always an option, but rarely the best one.

If the time comes when it seems like you’re done, you’re tired of trying and all options have been considered and the only attractive one seems like giving up completely. Remember this: you’re not alone.

Life is made up of moments. Moments in which we’re either giving or seeking love. And even in the deepest moments when love seems infeasible, know that someone will miss you.

Someone you may not even know.

Anything is possible, until we give up.

A New Perspective On Suicide

I’m updating this post on May 22nd, 2017. Since initially writing this article many years ago, my perspective has changed on this topic somewhat. Specifically on the selfish side of suicide.

I understand there are mental health, and in some cases, irreversible circumstances that lead someone to taking their own life. I’ve known some people who have and accept that they’re at peace now.

The feeling of despair and hopelessness is not unknown to me; addiction, boxes of unpaid bills with no end in site, the death of a close friend and the end of a marriage—all in the span of 6 months. I was literally a few steps and actions away from giving up. But I didn’t, and my life is amazing today.

I just want your life to be amazing too.

If you’re angry, lonely, feeling helpless, or heck, just need someone to vent your anger at; yell at me: jared [at] jaredakers [dot] com. I won’t judge.

Some Things to Think About

I’m not a professional in the mental health field. I’m just someone who seriously considered suicide in my past. And if you’re still reading this, you’re still here, which is a good thing.

I’ve come across a lot of information on the internet regarding suicide, and something I came across recently provided some interesting things to think about. From “Suicide: Read This First“:

Suicide is not chosen; it happens when pain exceeds resources for coping with pain.

You can survive suicidal feelings if you do either of two things: (1) find a way to reduce your pain, or (2) find a way to increase your coping resources. Both are possible.

I encourage you to check out the rest of Suicide: Read This First and the resources offered there.