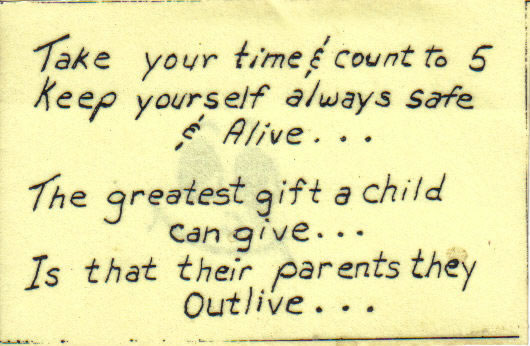 During the summer of 1989,  just out of High School, I spent three weeks in the USSR. The above picture is a note my mother hid in my luggage that I found while on the trip

March 12, 2006 was the darkest among many dark days for me.  Later it would be defined as the catalyst that led to my shift or sometimes referred to as a moment of clarity.

It was the day I left behind my perception of the world and my place in it. After a failed marriage, a job I resented, and a friend who had recently passed away, I was depressed and overwhelmed with life. From a loft apartment in downtown Kansas City I would make my final stand. With money in the bank and a liquor store three blocks away, I was in heaven, and hell. This is how I remember those last few days.

Eight hundred pounds, my body, my soul, weighs eight hundred pounds. For days, I have been laying here on this futon, alone in this loft, too weak to walk or eat much. The booze has stopped working. The empty bottles are a reminder of what is left of my soul, emptiness. Every warm drop of life sucked out of them. I remember hearing that personal hygiene is one of the first things to go as we totally lose control and go insane. For the last few days, I have forced myself to crawl the twenty feet to the bathtub. Not any more, I don’t care. My fingernails are long, I used to hate that.

There is a pipe running through my loft about ten feet from the floor. The paint is chipped and peeling. The smooth outer shell that once hid its cold hard underneath, enabling it to blend in with its surroundings, is falling away. In the corner, a half-built entertainment center, my 32″ Hi-Def TV sits on the floor. Next to it, a pair of Monster Cables, I will use those to hang myself from the pipe. How fitting to kill the monster I have become inside. It’s going to be epic; my story will touch the lives of others and give them the strength I lack. Maybe I should get a video camera and film my own demise… I’ll be famous. Who am I kidding, I’m too weak to even walk two blocks to the liquor store and my car has two flat tires and tags that have been expired for a year and half. I would never make it.

Strewn about the loft is evidence of my last days here. Several dozen empty vodka bottles—more hidden in the empty cabinets—as many empty beer bottles, a pile of unpaid bills, dirty clothes, sunflower seeds, and one of those single sandwich grills where I cook frozen hamburger patties to force-feed myself. A blanket covers the window, making it hard to distinguish night from day. Paranoia insisted I cover the peephole in the door and pillows line the small closet where I spend most daylight hours in case someone tries to enter. On the street below, iron sheets cover holes in the street—unfinished work to be done. Cars passing randomly, “thump-thump,” add to my paranoia. Was someone knocking? From my latest count, there are 530 bricks along the north wall. That can’t be right, it’s a big wall. I loose concentration. I am going crazy.

Growing up my mother would say, “The greatest gift a child can give is that their parents they outlive.” She hasn’t come to see me. My father came last week to see how I was doing. He left with tears in his eyes when I told him everything was going to be OK, his response, “its not OK son.” My parents live about an hour away. For my father to come to the “big city” says a lot. I don’t think he has ever been here before. I wonder how he found me. A cousin of mine came by too, as well as some friends; I sent them all away. Even the police responding to a call about my well-being; the a-holes thought I was on meth—geesh, can’t they tell a drunk and crazy man when they see one? As with everyone, I sent them away, “I’m fine.” But not before thanking them and telling them everything was going to be OK, that this was my decision and I’m OK with it. I was concerned for their conscience, that it be void of any regrets that they didn’t try something. Although my mother hasn’t come, she’s been praying for me. I know her. She knows there’s nothing she can do for me but pray. I did promise her that I would call everyday to let her know I’m OK. The calls stopped but I try to send an email each day. The days have run together so I’m not sure when the last email was sent. The voice mail on my cell phone is full. It hurts too much to listen to the messages.

My sister hasn’t come by anymore either, although I have talked to her on the phone, I think. Or was that an email? She does not feel sorry for me, and I know she is not coming to save me this time. She told me so the last time we had contact. “I don’t feel sorry for you and I won’t come save you, but if you choose ‘life’, call me and I’ll be there.”

I have a niece; she must be almost seven months old now. I wonder what her face looks like. I bet she smells of life, innocence, happiness and freedom. I wish I were innocent. I was not there when she was born. I was isolating in another place away from her world. The only place I have ever really known, and really hate. I hate that this place of isolation has become more comfortable than failing as the person I want to be. I treat loneliness with isolation, I am sick. I wanted to be a good uncle, a great uncle. I always had the best of intentions and always wanted to be there for my family and my ex-wife. She let me go; she knew I was sick.

About a week ago I tied a belt around a vertical pipe that runs from the floor to the ceiling along the West wall. I know people in jail use belts to hang themselves. I look at it again, knowing I’m too weak to stand on anything or reach the pipe overhead to use the Monster Cables. STOP, just stop. My head will not stop playing the images of the man I never was and have always wanted to be. That man is too far now—unreachable. I want to die. The prayers of getting robbed and shot on the way to the liquor store didn’t work. Sleeping under the bridge to attract a would-be killer didn’t work. The prayers of getting cancer so I can die with some dignity didn’t work. Alcohol isn’t working now either, causing my entire body to wretch in convulsion as it touches my lips. My mouth tastes like metal, cold iron.

War Games; my mind is eating itself again. Global Thermal Nuclear War or Checkers, life with or without alcohol; regardless it’s still got “me” in it and there’s no way to win at this game. I just want it to stop, the regret, the guilt, the loneliness—me. I wish my head would stop spinning with thoughts and images folding in on themselves. Liquor, work, anything used to stop the brain eating, not anymore. Now what? I have two choices, kill myself, or try life again. Killing me would be easy, I hope. Living is hard, I know.

I hear my mother, “the greatest gift a child can give is that their parents they outlive.” Does my phone still work? I tried using it a few days ago to order some food, but I couldn’t dial, my brain refused to stop eating itself long enough to put the numbers in the right sequence. I want to die, I’m so so tired. I’m just tired. My mother… God what I’ve put her through.

Speed dial, my sister is number 1 on speed dial; she’s a few miles away. I hit the number 1 on my cell phone, she answers, and I say “I’m at that point. I can’t do it anymore. Come get me.”

Eight hundred pounds. My sister helps me carry my eight hundred pound soul out of the loft. She sits next to me all night as I lay in her stepson’s bed. I tell her I don’t love myself. She tells me she does. That she can love me enough until I can love myself. She sits with me with her hand on my forehead; I feel a hundred pounds lift. The DT’s and night terrors start. I concentrate on the toddler clothes hanging in the closet. I notice the little hangers holding little clothes that keep little bodies warm. The bedroom smells of children—life, innocence, happiness and freedom. God what I wouldn’t give to be that innocent again

The next day my sister drives me to a treatment center I’ve visited before. I love these people, they never gave up on me. I’m scared but I chose life. Seven hundred pounds, my soul weighs seven hundred pounds.

Since that day, I have awakened each day and chosen life. I pray each morning when I wake and again at night before going to bed. Each day I concentrate on three things: trust God, clean house (morally), and help others. Today I am closer to being the man I always thought I could be. My soul has been lifted from a weight that once pulled me to the depths of hell to one of lofty spirit. And for that I am grateful. But that’s just today and tomorrow I start all over. And for that too I am grateful.

Click here to listen to a song I wrote about the experience.